Explore the Universe at the Kennedy Space Center 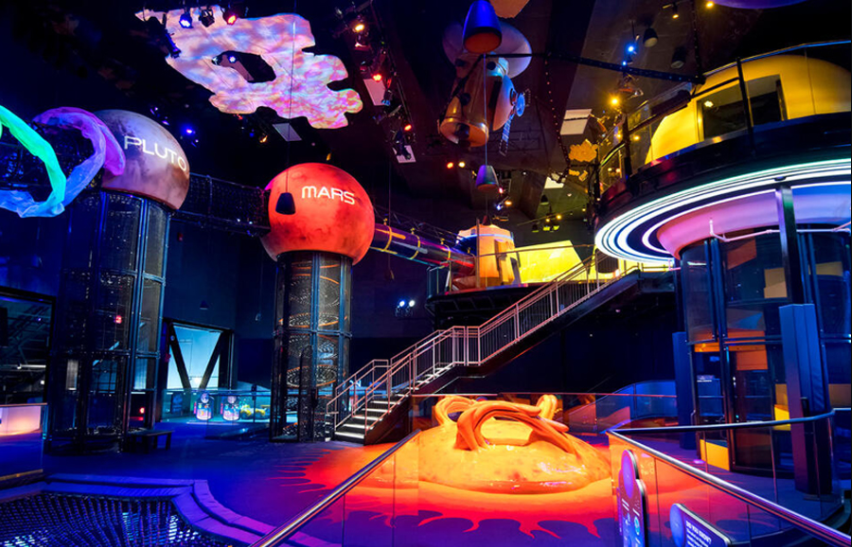 How many dead solar systems are we looking at when we view the stars at night? Does alien life exist? And what the heck is an infinitely-expanding universe expanding into?

We’ve all wondered about the great expanse that is space at least a few times in our lives.

And it’s easy to become overwhelmed by just how infinitesimally small each of us is when it comes to an infinite universe.

So it’s no wonder that the Kennedy Space Center is such a popular attraction. This educational center places our role as a species into the context of the universe at large.

From teaching us about the accomplishments humankind has made in the grand exploration of the cosmos, like landing on the moon and visiting Mars, to providing visitors with the opportunity to experience a microgravity environment…

There’s no better way to learn about our species’ interactions with outer space.

Ready to explore the universe? Keep reading to learn about what you can expect from your visit to the Kennedy Space Center near Orlando, including the center’s location, hours of operation, and ticket pricing.

Background of the Kennedy Space Center

Given the center’s continued appeal, it has made a series of investments over the years to improve visitor experiences, including conducting renovations and adding educational and interactive exhibits. Much of this has been funded by private and visitor-generated funds.

The Kennedy Space Center has ongoing plans to make additional investments at the center so it can continue being an informational and fun way to learn about humankind’s contributions to space exploration.

Things to Do at the Kennedy Space Center

Whether you have only an hour to spend or an entire day, your visit to the Kennedy Space Center is sure to be jam-packed with information. You can visit all of the attractions included with your general admission ticket or purchase attraction add-ons to maximize your experience. Learn more about these options below.

Start your trip to the Kennedy Space Center by visiting the Astronaut Hall of Fame where you’ll learn all about the American astronauts that have led the country’s space exploration missions. Then, take a bus tour and visit some of the restricted sections of the center, such as the vehicle assembly building and launch complex 39B.

And you don’t want to miss the space center’s Rocket Garden, which includes real versions and replicas of the following retired rockets:

During your visit to the garden, you can learn all about the intriguing aspects of these rockets, such as their notable missions and thrust capacity (like the fact that the Mercury-Redstone was the first rocket that carried humans).

Next, get a feel for what it must be like to pilot a space shuttle yourself using the Astronaut Training Simulator. This simulator will provide you with the opportunity to practice landing rockets both near and far, including docking at the International Space Center or right in your own backyard at the Kennedy Space Center’s Landing Facility.

Finally, cap off the day by grabbing a seat at the Space Center’s IMAX Theater. Not only do you get to learn about things like asteroids and flights to space… but you can do so while eating popcorn and candy, just like a classic movie theatre experience.

If you’re not quite ready to go home after experiencing the attractions included in your main ticket entry, don’t despair! You can choose from a variety of admission add-ons to maximize your experience.

Try being an astronaut for the day during the Kennedy Space Center’s Astronaut Training Experience. During this four-to-five hour program, you’ll get to experience a microgravity environment as well as problem-solve using NASA’s simulation technology.

Or if you prefer to play Martian, sign up for Mars Base 1 and learn about what it takes to travel to and live on Mars. This program provides individuals with the opportunity to learn about growing vegetables and optimizing energy intake on Mars, including harvesting produce and programming robots yourself.

The Kennedy Space Center has additional attraction add-ons, including Cosmic Quest and ATX Training Stages. You can learn more about these attractions on their website.

Price, Location, and Hours of the Kennedy Space Center

The Kennedy Space Center is open Monday through Sunday from 9AM to 5PM. The center is closed on some holidays, such as Thanksgiving and Christmas, so check out their hours of operation before planning a family get-away during the holidays.

Ticket prices to enter the Kennedy Space Center are listed in the table below. Keep in mind that some of the additional attractions, such as the Astronaut Training Experience and Cosmic Quest, cost extra.

Additionally, families can purchase an annual family pass that costs $432.10. This covers the entrance for two adults and four children aged 3 to 11 years.

From the Rocket Garden to the IMAX theater, the Kennedy Space Center is full of opportunities to learn about the contributions humans have made while exploring the great expanse of outer space. Spend the day exploring the center (wear comfortable shoes!) and maybe even purchase an attraction add-on. No matter what exhibits you visit, you’re sure to walk away from the space center with a newfound sense of wonder about space and our role within it.